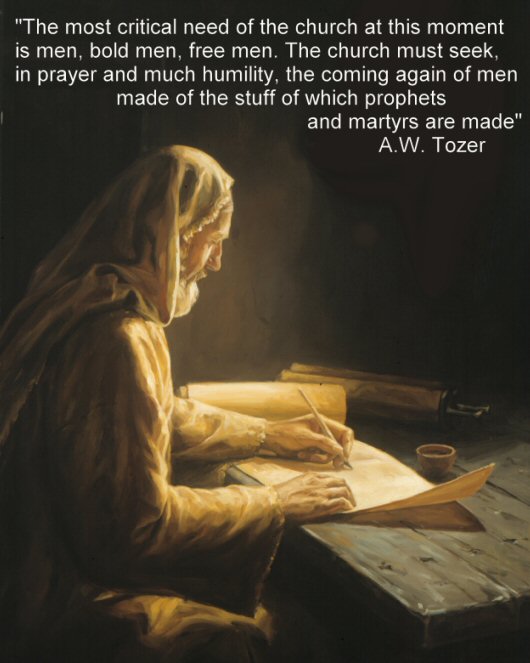 “See, I have this day set thee
over the nations and over the kingdoms,
to root out, and to pull down, and to destroy,
and to throw down, to build, and to plant”
Jeremiah 1:10

The people of God become weary with the words of His prophets. They perceive the negativity and the sharp words as antagonistic. The desire for only encouraging and comfortable words is human nature. The thinking is that the world, the trials, the heartache and troubles of this life are more than enough for us to bear. This would be fine if God had no other purpose in His house than to bless us and comfort us in our situations. But God has a purpose and He sent His Son to bring about the thing He has purposed. God is intent upon His end and He sends His word to bring it to pass. God is a wise builder He is not going to patch up an old thing (see the parable of the wine skin). He must make everything new. It is the New Wine-skin which receives the new wine. He is not going to pour out Himself (the New Wine) into the Old. While men cling to their sins, former ways and institutions God withholds Himself; and He, as a loving Father suffers while He withholds. Joseph had to keep himself hidden from his brothers until there was a change of heart. At one point he had to leave the room as the desire to embrace them had to be restrained because of the hardness of their hearts.

The words of true prophets are not harsh for the sake of being harsh; they speak words necessary for God to finish His work. God cannot build until He tears down. He cannot plant until He roots up the evil and self-seeking ways of men. He cannot and will not sully His ways with the methods of men; the overlooking of sin to populate their churches and accomplish their agendas. He must tear down the lofty pursuits of those who seek the preeminence in His house.

God’s end is to prosper, bless and reveal Himself to His own. He never wavers in His faithfulness to us. It is we who need to change. It is we who need to give heed to His word and His purposes in this day. God is Holy and as such He requires us to be holy, pure and set apart as purchased possessions. It is the joy of the Lord we pursue not our own. His joy becomes our strength to do the things which please Him.

“Therefore, have I hewed them by the prophets; I have slain them by the words of my mouth: and thy judgments are as the light that goeth forth. For I desired mercy, and not sacrifice; and the knowledge of God more than burnt offerings. But they like men have transgressed the covenant: there have they dealt treacherously against me” Hosea 6:5

The hard words and God’s judgements were as “light” going forth. righteousness is the result of light. It is a light which proceeds from God to give light unto His people concerning their ways and their condition. He desires mercy, not religious sacrifices. He desires that His people know Him rather than all the programs, religious prayer meetings and traditions of men. His people become content with tepid offerings of lukewarm hearts. They become satisfied with elaborate events and magnificent buildings even though Jesus said there would not be left one stone upon another when He is finished! The true building of God is made up of living stones built together as a holy habitation wherein He alone has the preeminence; One Lord, One faith and One body. It is to this end His prophets speak, weep and anguish over the blindness and stubbornness of the day.

“We are not diplomats but prophets,
and our message is not a compromise but an ultimatum”
A.W. Tozer